Now user can activate or de-activate APO codes, also same can be controlled from the user setup for the users.

Aged Account Receivable by Job can now be seen by Job but not just by Customer.

In Cost & Billing Detailed Report the Header is made available on each and every page.

Task- Job No. not flowing on sales credit memo.

1.On entering the Job no. on the Sales Credit memo Header, the Job no. value is now flowing to the lines.

2.The Job No is now made editable, now system is creating Job ledger entry while posting the Sales Credit Memo.

Update has been fixed now In Sales Invoice the Job Number if selected in Header then it is now Updating in the Sales Invoice Lines also. 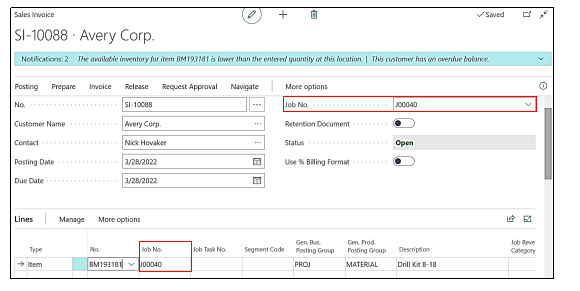 There was an update coming while creating Change Order from any job but the update has been fixed now.

There was an update while updating to the latest ProjectPro release, update has been fixed now.