After the Enhancement, the system is now assigning the job number + the requisition #/version as the pre-assigned sales invoice#. I.e., PR2002.1.0

After the Enhancement, if we insert any blank line with the only description in between fetched lines in Progress bill sub form of a Progress billing document, the system does not give update of blank lines now and Sales invoice gets created.

However, when we view the sales invoice document, those blank lines (with some description) are not copied onto the invoice lines.

After the Enhancement, following pointers has been Enhanced-

Dimensions need to flow from Job Card to

After the Enhancement the Dimensions are now flowing from the Job card to General Journal Entry's for Rev Rec, as shown in the screenshot below.

After the Enhancement, New Report can now be printed for Job Quote based Task Total

As shown in the screenshot below

Validate Dimension Set ID While Creation of PO through Subcontract

After the Enhancement now, Dimension set ID are validated while creating Purchase Order Through Subcontract

To be defined Setup Based

After the Enhancement, now the Line Type in the Progress Billing Sales Invoice will get populated as Item in place of the G/L Account by enabling a Boolean, Enable Item Nos. for Progress Billing on Job setup Page.

After the changes Publisher Parameter has been changed.

After the changes done, Vendor Expiration Popup on Boolean basis has been stopped on Payment Journal.

Change for Job Planning Line Editable Process Button on job card has been made as shown in the screenshot below.

Issue while creating a Sales Document from Progress Billing:

The update has been fixed while creating the Sales Order from Progress Billing.

This has been Fixed Now; the Dimensions can be pulled into the credit memo header.

The update has been fixed now, there is no such update as Gen. Prod. Posting Group on Locked Job Planning Line can now be taken with more than 12 alphabets.

If the job forecast worksheet is opened even for once, it was taking the total value of forecasted completed costs which was last opened, but this has been Fixed now.

The has been Fixed, now no update is coming while changing the Dimensions in Subcontract Line.

Remove PO from subcontract Card when PO is deleted

After the changes PO from subcontract will be removed when the PO is deleted.

As shown in the screenshot when Purchase Document is deleted.

While creating a subcontract Purchase Order for Resource, the system does not auto populate the "Job Line Amount" on the Purchase Order.

After changes While creating a subcontract Purchase Order for Resources, the “Job Line Amount” is now auto populated on the Purchase Order

After the changes the Job Quote Report is now showing the amount when printing and the report caption is updated. 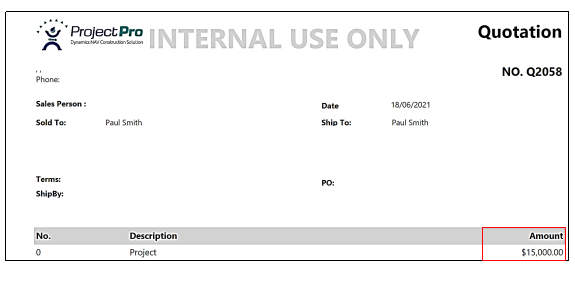