On the Job Forecast Worksheet also the value will be calculated along with the Unit of Measure defined.

In this ticket the ProjectPro is linked to its official website. When ever user want to learn about the process they can Click on Settings Button at the top then “My Settings”

On the Help and Support page click on “Progress Billing”. A website will open where all the necessary contents are available for the user to learn.

Enhancement - There is a new field created on the G/L Account card “Cost Category” in which we can enter the Cost Category.

On the Job Planning lines if we enter the G/L account and the cost category will automatically be populated. The cost Category will also flow from the respective G/L Account to Job Journal and can be posted.

If this Boolean is checked then all the dimensions defined on the Job Card will flow to all its associated transaction.

Enhancement - In the Job Planning lines we have a field called “Variant Code”.

The variant code field was not available on the Job Material Worksheet. That is why the PO could not be created with “Variant Code”.

But now the Variant code flows from Job Planning Line to Job Material Cost. and then to the Requisition Worksheet. The Po can be created with Variant Codes now.

Hot Fix - In Crew timesheet process can be continued without any update message now.

The name length update was popping out if the no of characters is around 20. The update has been resolved and the name can be character length of around 20.

The issue has been resolved.

Hot Fix - On the Job Quote fields like “Markup”, “Gross Margin” and Gross Margin Percentage is not being calculated when button “Update Profit” is clicked.

But now the field values are calculated by clicking on “Update Profit” button.

The issue has been resolved.

In Subcontract process we have a feature of “New Version”in the “Progress Payment”. 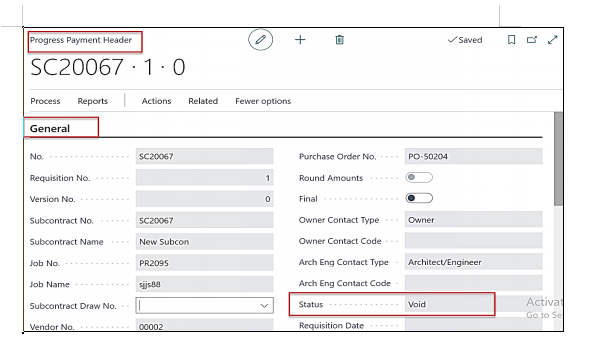 There was update appearing on the Requisition Worksheet.

This update has been resolved now. We can run the “Carry Out Action Message” to convert to the PO.